THIS ARTICLE IS OBSOLETE

Welcome to Tribes: Ascend Beginner's Guide. Within this article, you will be introduced to the mechanics and general how-to for this fast paced shooter.

Tribes: Ascend is a PC exclusive free-to-play title that is best played with a keyboard and mouse.

The image below shows all the necessary keys to an effective player.

WASD are your movement keys. To move in the direction that you are currently facing, press W. S will move you in the opposite direction. A & D will strafe you left and right

Moving your Mouse will rotate the direction you are facing. Note: Inverted option is available in the settings menu, and set to default when piloting a Shrike.

Right Mouse Button (RMB) activates your jetpack while the button is being pressed.

Space Bar activates your skis. By default you must hold the button down to keep your skis active, but this may be changed to a toggle in the setting menu.

The next section will talk more about these two mechanics and how they define the Tribes series.

Q switches your active weapon between your primary and your secondary.

Tab shows the scoreboard that includes relevant information such as your teams' classes, the players' ranks and their current number of kills and assists.

E swipes your melee weapon at your enemy. The melee attack is great for finishing off enemies that are in a very close vicinity to you.

R reloads your current weapon. It is notable that weapons will automatically reload when that weapon hits the end of the clip and the player has more ammunition.

F throws your grenade or places your equipment, depending on your class.

C activate/places your pack or equipment, again depending on your class.

G Is the interact button. It currently has three functions. Push G:

O will toggle the identifications for the location of all your teams assets.

Shift will scope in your vision to where you are currently looking, not all weapons may fire while scoped. The scroll wheel on your mouse controls the zoom level.

Z will toss the enemy flag if you have it within your possession.

X toggles your camera between first person and third person. Hold the Middle Mouse Button to rotate the camera while in third person view.

K is for suicide. Whilst this may seem silly at first, this allows the player to quickly react to base threats, or simply return to base.

Reading through the controls section, you should have noticed two very peculiar tools at your disposal: the Ski button, and the Jetpack button. These two items make Tribes: Ascend and the Tribes series so distinct. The two mechanics introduce many intricacies to the game. Skiing can be activated/toggled with the Space Bar and jetpacking used by pressing the RMB. Skiing doesn't have any negative effects on its user, where as using a jetpack will drain your energy. Energy regenerates over time to a class specified capacity.

The first that needs to be mentioned is large amounts of velocity. Velocity can be easily acquired through the combination of skiing down hills and jet-packing up inclines. But why do you need velocity? Well, a foe who is not moving will be easy picking for your team. Motion throws off the enemy's targeting, allowing more time for you to complete your objective (either neutralizing a target, asset or capturing a flag). In addition, thanks to the inheritance mechanic of Tribes: Ascend, when moving at speed some weapons will be easier/harder to hit with.

The second is that jetpacking and the terrain allows players to access the Z-coordinate (up-down). Each player has the ability to expel enough energy through their jetpack to rise upwards. Again, why should you care about this? The height advantage in Tribes: Ascend allows the player to have better situational awareness of the battlefield. This awareness offers the player a better view of the opponents' motion so that the player may lead his shots. Beware, though, falling hurts.

Most weapons in Tribes: Ascend are not your standard run-of-the-mill Hit Scan guns, instead Tribes' weapons are projectile based. These projectiles take time to travel across the battlefield before exploding upon impacting on a surface or enemy. Due to travel time, shots must be lead in front of the path of the target. 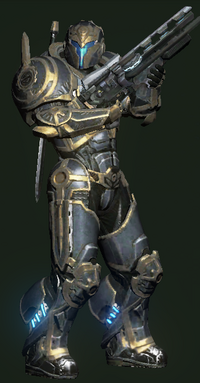 The classic weapon in Tribes: Ascend is the Spinfusor. The Spinfusor shoots discs that are not affected by gravity. These discs move at a moderate speed and have some splash damage upon impact. This is a decent weapon to start out with in Tribes, as it introduces the player to inheritance. Inheritance is addition of a percentage (50% or 100% with the Blinksfusor) of the player's velocity on to the disc's specific velocity. There are many different Spinfusor Type weapons in Tribes: Ascend.

The question is how far do you have to lead your shots? The answer is that the faster both you and the target are travelling and the direction in which each of you are travelling makes a single answer impossible. A good rule of thumb is to shoot ahead of them by a few meters at common landing locations where their feet will be on the ground. Shooting at a target on the ground is a lot easier and more efficient than trying to hit them mid-air. A common mistake is to shoot for the opponent's body, but this causes missed shots to sail into terrain outside the blast radius of the projectile, instead, aim at the targets feet or the ground below them.

After a few games, predicting the foe's path and leading your shots will become more natural but still difficult. These tips will allow you to be more efficient in your deathmatching skill and conservation of ammunition.

These type of weapons will arc due to gravity. Fusion Mortar, Bolt Launcher and Thumper DX are three examples of these type: each moves at a certain speed and is affected by inheritance and therefore the player needs to lead the shot for these types of weapons.

These types of weapons instantly hit the target if the 'bullet' emitted intercepts the target. Currently, Sniper Rifles, some pistols (Eagle Pistol & Sparrow) and Shotguns are hitscan weapons but the Chain Gun, Assault Rifle, and the Rhino SMG are not a hitscan but instead shoot a fast moving projectile. Hitscan weapons are an interesting addition to Tribes where previously all weapons (aside from the laser sniper rifle) were projectile based.

Tribes: Ascend introduces a new system of character selection, where the player chooses a unit with set traits and weapons and characteristics, augmented by perks. Each class has two weapons, a grenade, unique pack ability and an associated weight. All of these are interchangeable with other class-specific sidegrades for each slot. 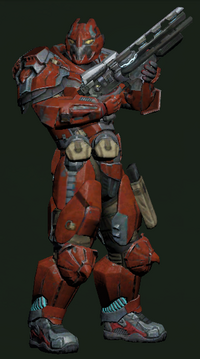 Each class has a variety of choice when it comes to their belt items; some classes have offensive grenades, such as the Frag XLs or Anti-Personnel grenades, whilst some have defensive mines such as the Motion Sensor or Claymore Mines, and some others such as the Repair Kit. Each belt item varies in effectiveness versus their intended target.

To win, a team must capture the enemy flag up to five times. This can only be done if emphasis is placed on gaining velocity and grabbing the flag. This is the cappers's primary objective. The capper will be stopped dead in his tracks by the opposing team's HOF fire, therefore HOs are required to mortar the flag stand to remove the HOF. Once the enemy flag has been acquired, the capper must race away to safety, the escort's job is to safely see the capper out of enemy territory. If the capper drops the flag for any reason, it is the escort's role to reacquire the flag. During the capper's escape, HO can also aid in escorting.

For a team not to lose, it is essential that the team has adequate defense. A heavy class should always be standing on/around the flag to body block incoming cappers (HOF). In the case that the HOF is taken out, an aide (also a heavy class) should be near to take the HOF's place on the stand and prepare for the imminent run-by. A Technician should always be on the team to keep the base in working order and to have the extra firepower from turrets. When the other team's capper does get a hold of the flag, it is important to have a group of units with mobility (either Medium or Light) to chase down the capper and retrieve the flag.

Unlike most other games, the VGS system in Tribes is a crucial part of the game, as it allows for a quick and accessible method of team communication, therefore allowing teammates to quickly react and be vigilant to certain threats that are imminent.

Although that is what it is intended for, the VGS chat log usually diminishes into a Shazbot! spam. Don't do it.

To access voice commands a player must press V (default setting). Once you have accessed the Voice Command main menu, press the required key to access the area of Voice Commands you wish to use. Pressing the letter G will allow you to speak to everyone on the server (G stands for Global). The corresponding letter to the submenu will allow a player to easily identify what command they wish to use. With a few keystrokes a player can alert others of what is happening by using Voice Commands, it is important not to fill voice chat with spam as this will impede important information from being heard.

It is just as important to be able to retrieve your flag from the enemy as it is for you to be able to capture the enemy's flag. Chasers generaly consist of Pathfinders (PTH abbrieviated) since their basic grenade automatically removes the flag from the enemies back (this also happens to yourself if you try to speed up with grenades). However, they have the option of taking the Thrust Pack which allows them to speed up to initiate the chase with an advantage.

Tribes: Ascend has several differences from other games in the Tribes series. Although many features such as Skiing, Jetting, and Spinfusors are retained, Hi-Rez Studios has opted for many changes and new features for this most recent title.