This article refers to several prevous versions of the map Bella Omega. It is presented here for reference only.

Bella Omega is a map in Tribes: Ascend. The map is of a contested holding on Bella, a planet in the wilderzone. Blood Eagle and Diamond Sword currently are battling for the domination of Bella Omega (Version History). The setting of the map is of an arctic wasteland, with rolling hills and some ancient dead roots scattered about.

The Blood Eagle and Diamond Sword bases are mirror images of one another on this map. There are three Base Turrets surrounding both pillar-like bases, along with two outpost towers that also have inventory stations. Directly in front of the base is a vehicle pad and basement entrance. Within the base is an energy conduit that extends from the basement all the way to the top of the base. The base features four levels: basement, ground, flag stand, and apex. Bella Omega (Version History) incorporates an interesting generator mechanic as well; if the generator is active, there is a seal in the energy column that impedes any players wanting to access the flag stand from lower levels. The generator also controls force fields for two of the four flag stand entraces, which are impenetrable to enemies if active. There is no force field that blocks the path to the generator.

The main level only houses two Inventory Stations aside from the energy column.

The flag stand level has the flag situated at the center of the lift. This level is open on two sides if the generator is up, with an outer balcony. When the generator is down, the front and back doors open up, allowing cappers to come in at any of the four open entrances. Since the flag is in mid-air, this makes keeping a HoF(Heavy on Flag) difficult to maintain.

The apex is the top level of the base, and offers an advantageous overview of the terrain. This level is open to all four directions but does not have an outer balcony.

As stated, Bella Omega (Version History) is a sand level with rolling hills. In between the two bases is a alien artifact. The maps path from one base to the other leads under an ice-rock-root bridge through the artifact area, then under another bridge. Scattered around the map are frozen roots jutting out of the hills. In the distance the large trunks for the roots can be seen 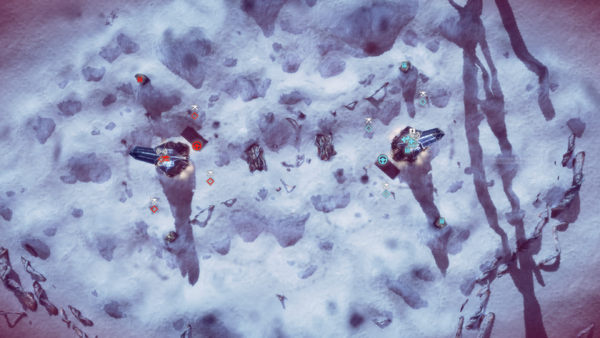 The map is not currently in the map rotation. Strategy will be posted when it is re-released as they are making fundamental changes to improve the map.

Retrieved from "https://tribes.fandom.com/wiki/Bella_Omega_(Version_History)?oldid=9973"
Community content is available under CC-BY-SA unless otherwise noted.