Crossfire is a Capture the Flag map in Tribes: Ascend. It is unrelated to the similarly named Tribes 2 map Cross Fire although it shares many features with the Tribes map Broadside/Blastside (small size, floating bases, floating platforms). It takes place on a lush set of tropical islands with the two teams' base ships at opposite ends of the map. The flag stand is more protected than most other CTF maps.

As seen below, Crossfire is set in a tropical archipelago. The map terrain seems to be point symmetric. 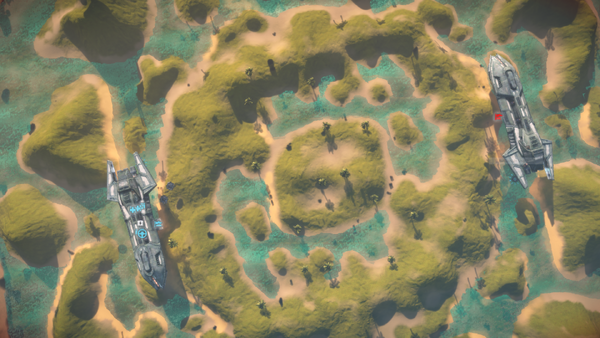 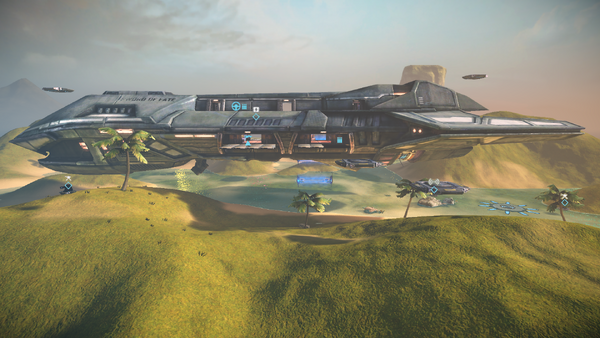 The base ship has two levels: the flag level, and the generator level. There is a shaft at the bow of the base to travel between these two levels.

There are two main flag routes on Crossfire. The first route is very direct and takes cappers straight through the enemy ship and out the other side. This can be seen in several of the trailers released by Hi-Rez. Cappers can either start from their base and quickly ski across the map, or sneak behind the enemy base and jump through from there.

The second route takes cappers around the perimeter of the map. Starting from the players' own base ski over to the large hill with what looks like a radar tower on top and get a big burst of speed skiing down it. Disk-jump and jetpack up over the front wing of the enemy ship and skip across the flag stand with enough speed to confuse the Base Turret, then continue back across the map on the perimeter hills.

Doombringers commonly deploy force fields both at the sides of the flag stand and inside the entrances to the ship to discourage cappers. A HoF (Heavy on Flag) is good on this map, especially with the maxed out Super Heavy perk. Sentinels can reach the enemy base with their rifles because this map is so small, so keeping one nearby is a great help. Keep in mind that the enemy team can easily hit the flag stand with Tactical Strikes from the safety of their own base and Juggernauts will be launching Mortars in constantly, so defenses will need constant attention.

Deploy one Force Field at the entrance on the opposite side of the ship from the flag;this will protect it a little bit better (until someone gets on the hill behind the ship and starts shooting it) and still block cappers from passing through the ship. Place mines inside the ship: two in the room near the flag, one just inside from the conduit, and a fourth inside the shaft leading upstairs if you can. A second force field can be placed near the flag stand, preferably on a side, but it will need constant replacing. Depending on the enemy tactics you can either use Chain Gun or Heavy Bolt Launcher (for shooting into the ship), whichever you prefer.

Place one turret on the corner of the front platform that does NOT have the flag, this will get cappers coming in but protect it a little from mortars. Put a second turret on the corner of the back (starboard) platform of the ship where it can see cappers who pass through after grabbing but also fire on enemies using the conduit. Be sure this turret has a motion sensor next to it or it's Infiltrator bait. Place another sensor in the center of the room near the flag to help with Infiltrators and cappers who ski through.

Place Claymores near the flag stand as you prefer depending on which routes cappers are using. Place a Drop Jammer inside the base to help with Infiltrators, preferably on the top (inside) level near the shaft so it's radius will cover the roof and bottom level too.

It's preferable to use Stealth Spinfusor and Throwing Knives. For this strategy you will need the perk Safety Third and is highly recommend to use Survivalist too. The belt item will be Prism Mines. Place 4 Prism Mines in the entrances, Crossfire has 4 entrances per ship (in the flag level),so use 1 mine per entrance. The best place to put mines is between the boxes and the wall. Be always on stealth and the only thing you have to do is wait until someone comes. The Prism Mines' damage is 800 always (Inheritance doesn't affect them),so,if the stop or they are heavy armours,use the Stealth Spinfusor to finish off them. If the flag carrier gets out of the ship, use the Throwing Knives to bring them down.

The gen room on Crossfire is contained within the ship and with a few players' attention can be defended more easily than other maps. Most players will focus their defenses on the two entrances to the gen room by deploying Light Turrets and Mines. The small door to the gen room itself can also be a last-line choke point by deploying a force field to keep Raiders and Infiltrators from quickly firing in sticky's. A turret behind this force field is a good idea too. Crossfire is one of the few maps where a player does not need to stay inside the gen room to ensure its security. Because enemies can rarely get inside unnoticed, players can stay outside the ship and still quickly respond if a motion sensor or mine is triggered.

Enemy players can come in from the front or back of the ship, so place your mines around the corner just inside the entrances. Put an additional mine or two on the floor below the entrances. This set up will often kill players over and over since they are in such a hurry to kill the generator. You can put a Force Field covering the last doorway to the gen room but be aware of any Light Turret placement so you don't block their line of fire. If you plan on staying near the gen room the Heavy Bolt Launcher works great inside the ship.

Defending this gen room as a Tech is somewhat difficult because the entrances are so close to the generator itself. You can place turrents inside the gen room but most players will shoot in from out of range. Try placing one directly underneath the rear entrance to the gen room and another right in the generator doorway. Use motion sensors in both entrances and one in the middle of the room. The only way you can defend this room alone however is to stay inside it and back up your turrets, otherwise they will be destroyed in no time.

In CTF Blitz mode the flag changes locations each time it is captured. Sometimes this makes it harder to grab and sometimes it makes it easier. On Crossfire the CTF Blitz flag locations are: