Tribes Wiki
Register
Don't have an account?
Sign In
Advertisement
in: Map, Capture the Flag, CTF Blitz,
and 2 more

Katabatic is a Capture the Flag and Capture and Hold map in Tribes: Ascend. It is a remake of a map from Tribes 2 and is quite true to the original, with vehicle pads next to the bases and generators under the flag point, as well as even including the secondary bases, although these are now simply towers. The only noticeable major changes are the underground second entrances to the bases, the addition of spikes coming from the landscape and a more bumpy terrain.

Katabatic takes place on snowy, mountainous terrain. Unlike the original, this map has sharp ice formations scattered around it. There are many good skiing hills on this map. ( The image on the right shows the blood eagle base and respawn tower, containing one inventory station. ) 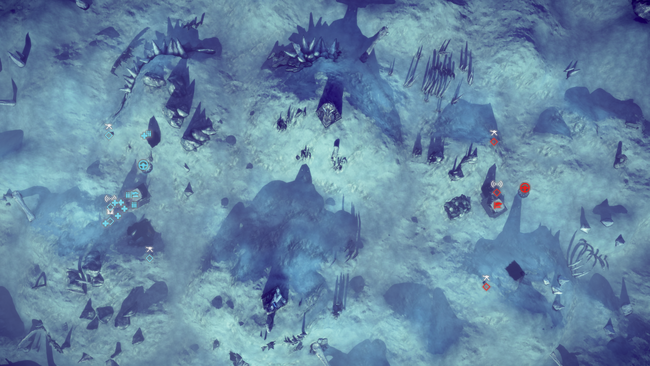 Katabatic has one main base with a tower and large underground section that houses the Generator. There are also two towers, one near the vehicle pad and another closer to the enemy base which is atop a tall hill. The flag stand is very exposed on the roof of the main base. There is a Radar Sensor on the main base's tower, and inventory stations below the flag stand and in the gen room. There are two Base Turrets, one in front of the base near the ice tunnel, the other behind the base on the hillside.

Base assets such as turrets, sensors, and the generator are all vulnerable on this map. Turrets are easy targets for mortars and the Radar Sensor can easily be taken down by anyone with a spinfusor. The generator room can be reached by an ice tunnel that points towards the enemy base, making it easy to ski inside quickly. The flag stand is also open and vulnerable to bombardment.

Common flag routes on this map take players around the outside of the hills which hold the bases and towers and approach the flag from either behind (so you are facing your base when you grab) or from the front corners (so you are heading into a canyon when you grab).

Like many CTF maps in Tribes: Ascend the flag stand is very open on Katabatic. This map is so open in fact that the flag is often left virtually undefended when players get tired of losing the flag over and over. The generator is often down as well so defenders have few options in the way of deployables. When powered, Light Turrets can be placed in the corners so they are somewhat protected from enemies. Mines around the perimeter of the flag can also work well if they are maintained. If cappers are using the same route over and over and the generator is up then Force Fields can be deployed to slow them down, but the stand is so big that they are only marginally effective. Sentinels are helpful for taking out cappers at a distance and stopping their escape.

Your role is key to stopping enemy offense on this map. HoF's have to try and see 360 degrees on the stand but you can call them from much further out. Also since enemy disruption will be keeping the flagstand busy your rifle will be the best chance for stopping cappers. Don't bother placing Claymores unless you like sniping from the stand itself as they will just get destroyed. The best sniping spots are the respawn tower and the large rock above the cave, where you can respawn aswell.

Even though turrets will be destroyed constantly on this map they often work better than Doombringers FF or mines. You can try and tuck them behind the corners of the stand or on the ramp, but they work just as well on the ground below the stand too. Keep motion sensors with each turret for Infiltrators and drop another sensor near the flag just in case cappers forget to shoot it.

Honestly sometimes it seems like Technician and Doombringer switch jobs on Katabatic as it's much easier to defend the gen with DMB on this map. Basic rules apply: put Force Fields on the back routes so they won't interfere with your Chain Gun shots, and place mines near the edges of the platform so cappers might not shoot them when coming in. Overall your job will be hard on this map unless the enemy has very inexperienced cappers.

The gen room on Katabatic has three points of entry and is therefore difficult to defend well. Remember to use the Radar Sensor in this map; it's right above you so it will mark every enemy in your base no matter where they are. Early in the match Doombringers can place force fields inside the ice tunnel on the ramp like a sort of net for enemy players trying to quickly destroy the generator. Mines deployed here as well will often catch the early Infiltrators and Raiders by surprise, but heavies will still get through. When on the Diamond Sword team try placing a mine right on the curved side of the tunnel where players will bump the wall after skiing inside. Another good spot is just around the corner where the tunnel turns away from the second ramp. Force Fields can surprise many players if placed inside the conduit shafts next to the inventory station since they are the the same color and won't stand out.

See above if you want to try and catch the early attackers at the start of the match. After a few minutes be sure to switch tactics and defend the rear entrances as this is where skilled Infiltrators will go. Plug up the conduits with Force Fields; players will often either be caught by these and alert you or stop and kill them which you can hear if you pay attention. Place mines to cover the entrance behind the generator and also on the ramp leading in from the tunnel. Use the Heavy Bolt Launcher if you have it as this will be a close-quarters fight. When using the Launcher remember you can hit the walls and ceiling behind enemies and still score a kill. If you only have the Chain Gun then rush enemy players as soon as your defenses reveal them; this will make your target a lot bigger in your HUD and also confuse many newer players.

Get a motion sensor between the conduits, on the ramp, and on the back entrance ASAP so you can spot Infiltrators. Place your turrets where they aren't obvious to give them a chance for more hits. There are a lot of nooks and corners to hide them in were they can still see a lot of the area. Keep them near the sensors you placed, don't worry about the gen room itself because once enemies get in there, turrets won't help you and they need sensors to see stealthed enemies. Use the Thumper if you have it, if not then rush enemies like the Doombringer above.

In CTF Blitz mode the flag changes positions each time it is captured, changing the tactics needed to capture it again. Sometimes this makes the flag easier to defend, and sometimes it makes defense more difficult. Usually the final flag position is in a covered area. On Katabatic, the CTF Blitz flag locations are:

There are 4 control points for C&H on Katabatic:

Flag Route: DS Side by TheSmallKiwiBird

Flag Route: BE Back 2 Front by TheSmallKiwiBird

Flag Route: BE Side 2 Side by TheSmallKiwiBird 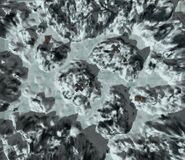 The overview map of Kabatic in Tribes 2

A flag base in Tribes 2
Community content is available under CC-BY-SA unless otherwise noted.
Advertisement