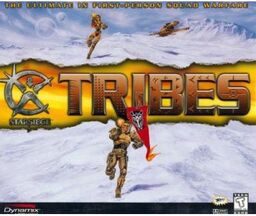 Starsiege: Tribes is the first game in Tribes (series). It was part of a preceding series entitled Starsiege.

Tribes is a squad-based multiplayer online game with no single-player campaign; it is similar in this respect to the Team Fortress and Enemy Territory games. The story is set in the 40th century, after humanity has settled across the galaxies via jumpgates. Conflict has broken out between several factions of humans, the two largest of which are Diamond Sword and the Blood Eagle. The latter is a tribe of people isolated from the Great Human Empire, whilst the former is a force of imperial knights sent to subdue them. There are also splinter tribes and the Children of the Phoenix try to act as peacekeepers between them. The player assumes the role of a warrior loyal to one of the four major tribes battling in the front lines of the conflict.

The battles take place on one of 40 maps. Most of the standard maps are outdoors environments in a variety of climates, from sunshine to snow and hail. In general, bases are scattered throughout the map depending on the gametype. The outdoor environments can extend for several kilometers.

There are five distinct "default" gametypes:

Each player wears either light, medium or heavy armor. Heavier armors supply larger amounts of armor, energy, and ammunition. Different armor types support different weapons and equipment; for example, only the heavy armor supports the heavy mortar but only light armor supports the sniper rifle. When damage is dealt to the player (by falling or being hurt by a weapon), armor is lost. Loss of all armor results in the player's death. After dying, the player respawns at the team's base (or somewhere in the field). Players also have an energy cell, which is drawn on for jetting, firing some kinds of weapons, and activating packs. The different armor types can be accessed at an inventory station.

There are various items of equipment usable by the players, including vehicles, eight weapons, and "Packs" which alter the abilities of the player. On some maps, bases include various defense mechanisms and other tools to assist the team: Generators, turrets, stations and sensors. Generators provide power to systems. Destroying them can disable an entire team's defense by deactivating turrets and stations. They are also among the objectives in the "Defend & Destroy" gametype. Turrets come in five varieties. They can all be destroyed by sustained fire and their shields can be drained by an ELF. Stations are where players get equipment or monitor the base. Sensors scan a radius for enemies and allow players to view troop movements in the PDA (Personal Digital Assistant). There are large and small varieties.

Weapons include the heavy mortar, sniper rifle, explosive disc launcher, short-range gatling gun, grenade launcher, blaster, plasma rifle and laser rifle. The heavy mortar is considered to be a good weapon for taking out base defenses from afar. The sniper rifle is the only hitscan weapon, with the others firing relatively slow projectiles.

The PDA is intended to provide information to commanders and give detailed information on the team's situation. Among other things, players can issue commands to teammates, view equipment status, monitor enemy activity (with sensors or hidden cameras), watch teammates in a miniature screen, and control turrets (although this must be done at a command station).

In addition to running and jumping, players are equipped with a jetpack which allows them to accelerate into the air until the armor's energy is used up. In addition to straight-line movement, the jetpack has other versatile uses. It can be used to make short hops whilst zig-zagging to make a player harder to target in open areas. An upward thrust can help the player evade oncoming enemies armed with short-range weapons.

Another method of movement is known as "skiing", and relies on an exploitation of the game's physics engine.If a player taps the jump button with the correct timing whilst descending a hill, their momentum will accumulate. High speeds can be achieved this way, and if this momentum takes the player to the crest of another hill, the jetpack can be used to rapidly propel them across the map. This technique was later developed into a game feature by Dynamix for Tribes 2 and used as a simplified replacement to jumping in Tribes: Ascend.