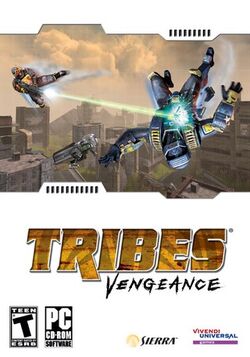 Tribes: Vengeance (sometimes called T:V or Tribes 3) is the third game in the Tribes (series). It didn't do well with fans of the original two games, as this was the first "real" Tribes game not created by Dynamix, who had shut down some time earlier.

The single player campaign follows five playable characters (Victoria, Daniel, Julia, Mercury, and Jericho) whom the player navigates through 18 missions. The missions are played in nonlinear order, set either in "The Past" (Victoria, Daniel, Julia, Mercury) or in "The Present" (Julia, Jericho, Mercury), with the former detailing the story of Julia's birth and childhood and the latter describing her search for vengeance upon the Tribals and later, for her own psychological identity.

Set hundreds of years before the events of Starsiege: Tribes, Vengeance depicts the birth of the growing Tribal War. It focuses on the events surrounding five different characters over the course of two generations and how they each contribute to the developing war. The story ("The Past") begins with a Phoenix sub-clan leader named Daniel abducting the soon to be Queen, Princess Victoria. He takes her to his home world to show her the injustices done to his people and the two eventually fall in love. During this time, a cybrid assassin named Mercury is hired by an unknown contractor to eliminate Daniel, but the contract is canceled moments before the shot is fired. Eventually, Victoria and Daniel try to make amends between the Imperials and the Phoenix, but it all ends disastrously when the Phoenix's enemies, the Blood Eagle tribe, stage a raid on a Phoenix base disguised as Imperial troops. In rage, Daniel kills the Imperial King, Tiberius, whom Victoria avenges by killing Daniel. It turns out that Victoria was pregnant with Daniel's child, who was born female under the name Julia soon afterwards.

Some years later, Daniel's brother, General Jericho, raids the Imperial Palace and kills Victoria in front of Julia. Enraged, Julia becomes an anti-Tribal extremist who uses her political powers and fighting abilities to humiliate them at every opportunity (in "The Present"). Eventually, she captures the leader of the Phoenix, Esther, and stages a trap for Jericho. Jericho, however, is killed by Mercury before she can do anything to exact her revenge. She then learns about her true father and, ironically, goes to Esther for guidance. Esther trains Julia as a Phoenix, accepts her into the Tribe, and the two try to make peace. At this point, the news arrive that the Blood Eagles have raided the Imperials and taken Olivia, late Victoria's sister and Julia's only remaining family, prisoner. Julia goes to rescue her but discovers that Olivia was, in fact, manipulating the Blood Eagle leader, Seti, the one who had hired Mercury, and was planning to set up a "freighter accident" to destroy a large part of the Imperial population center. However, in the end, Julia stops her and foils her plans.

Although the end of the game sees Mercury and the Blood Eagles' leader, Seti, killed by Julia, Olivia escapes her in the last moment, leaving the story without a definite conclusion.

There are three main factions in this entire game, and two minor factions.

The following are the different multiplayer modes.